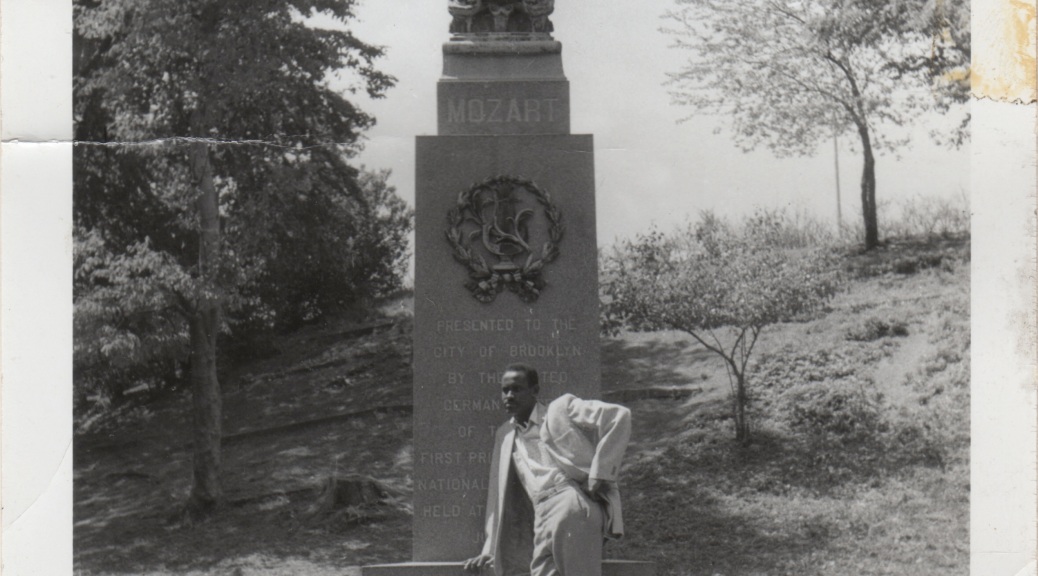 Seriously, this is one of my favorite captions. I don’t know who this is. I mean, it’s Bob, of course, according to the note on the back of a photograph I found among other photographs.

Despite my inclination, I am unwilling to ask the usual biographical questions about Bob. This is not for lack of interest but because I’m fascinated by the inherent tension between memory and mystery. It seems to be my mother’s handwriting, though she seems to have forgotten about him–far less about his whereabouts. This was Brooklyn in the 60s, a couple decades well before she came to New York. November 3, 1985. A Sunday. I’m sure if I were to press her enough for information, recollections of Bob–however brief or extensive–would come back. You know how it goes, don’t you?

Bob. He whistled better than he sang. He didn’t like ties or black suits. He liked jazz, though. Frankie Beverly and Maze. Yes. Mongo Santamaria’s 1959 Afro Blue. Yes. He felt you’d be crazy not to love that.

Love the Oscar Brown, Jr. version, myself–burned it onto a CD for a lover a few years ago, along with Mighty Love and some other classics. She loved it. I loved her. She cut herself pretty badly trying to dice onions, and I helped calm her down when she saw her blood and panicked. Then we ended and walked away without much fanfare, anger, or love. It’s tempting to wonder if that was Bob’s fate, or my mother’s–tempting to add layer upon layer of speculation on them both. It makes a certain kind of sense, I think, because even with other people’s stories, I am not inclined to reproduce something I consider boring. I almost want Bob to be as cool as he looks, hanging out with Mozart’s bust. He didn’t like ties, remember? And yet, I am not inclined to follow this course too deeply. Yes, my aspirations to creativity can, at times, take precedence and encourage me to dream–even if those dreams are stated poorly.

But there’s also a subtle pleasure in taking Bob–whatever he is–as he is, without the overlay.

This must be applied to every archive with the diligence of a historian.

Still somewhat presumptuous, there’s a respect for Bob that, to me, outweighs the need to make stuff up about him, the need to have “my slumbering fantasy assume reality,” as Oscar Brown himself would put it. Afro Blue. For, as complex a web of imaginings as I can construct, my feeling is that it will result either in my own entanglement or my readers’ confusion–neither of which I desire. So I have to stop, take a breath, lift my fingers off the keyboard, and look more honestly (if not knowingly) at what I see. This is the case with any archive: whatever its story, it will come only in the context it alone can provide.

Whatever path it–or any archive–sets me on will begin with what it alone can suggest.

Now to begin again. This is Bob. He stands, a black man paling in comparison to the heroic scale of Mozart’s bust, in contrast to his pale suit and white shirt. The piece, sculpted by Meuller, and presented as a gift to the people of Brooklyn, neither sits nor stands. He’s of average height, even in Mozart’s shadow. This makes him normal by default. Bob trains his gaze toward the pagoda. Perhaps he ignores the photographer, or is directed to do so. There is an implicit discomfort in his pose, as he leans forward a few inches lower than seems natural. He manages to pull it off, suggested more by the apparent absence of discomfort on his face than the awkwardly angled pose of the body (to which the comfortable face belongs).

Normal and immortal, like the Ozymandian block behind him. I suppose, in a way, I almost want Bob to be a mystery because I find that something profound occurs when we encounter actual physical evidence of that which is, in spite of what we see and can touch, unknown. But maybe the mystery of Bob, or the idea of a memory of him that I do not possess, tells me more about myself in the end. Basic stuff, like: maybe I still hold on to the wonder of not knowing something, in spite of my personality and professional training. Maybe I like the idea of thinking about Bob, aging at the same pace as Mozart’s bust, standing fully embodied, taking in the unknown goings on of a Prospect Park afternoon in the summer heat. I’m just vibing, here–riffing a little bit, but not entirely lost in the question if who he is, resting instead in the fact (proven by this image) that he was–and was here.

So, to begin again. This is Bob.