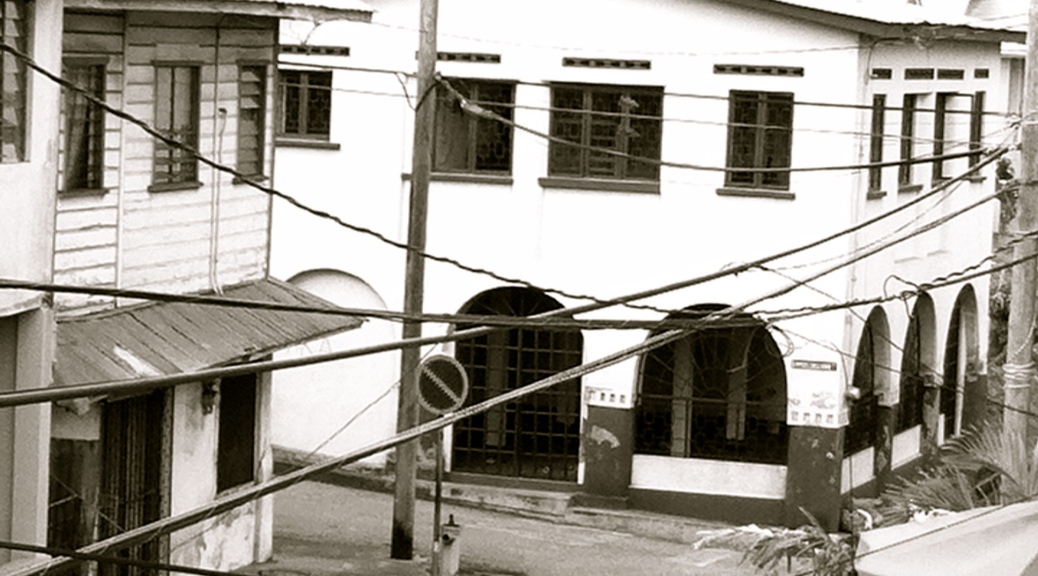 What do children care of history? Some will say that growing up, if we do it well, is about  experiencing life on our way to somewhere else–to being grown up–without being so distracted by that life that we forget to grow. That sounds like nonsense to me. Some things we miss, others we recall. And we are left to sift through the pleasures and traumas for the meaningful things that rest, leaning to one side like obstinate milestones, along our half-forgotten path. And while we can’t, or aren’t supposed to remember everything, the same could be said of forgetting–that is, forgetting, like remembering, should be subject to selection.

Okay, that sounds maybe kinda like nonsense, too. Maybe.
I’m working some stuff out, here. ‘llow meh, nah.
Time to go to the archives.

In the vast catalog of regrets for things I didn’t do as a child, for some reason more times running around the massive pillars beneath the Carib House in San Fernando is absent. Not surprisingly and not for any profound reason. Pillars offer little in the way of excitement: they are too easily negotiable, limiting our movements only to the left or to the right; they offer little in the way of a hiding place (after, say one or two times before being a default place to be checked); and (because of their immovability) cannot be bent, broken, thrown. In a word: Boring.

In my day, the house wasn’t painted–pretty much looked like it did in 1965.  It was restored in the 80s, but it retained the gritty, unfinished texture of its late 19th century youth when Samuel Atherly, a Bajan stonemason, was thought to have built it on a lot first occupied by Charles Le Cadre–this according to Geoffrey Maclean. Atherly apparently had a thing for arches. (As far as load-bearing structures go, arches are certainly up there, but I think they were about as interesting to me as the pillars that anchored them.)

So why the Carib House?

I’m getting to that–there’s a bit of a story involved. If I’m being honest, it never moved me in quite the same way as the other structures do in the post on early articulations about the rhetoric of houses. For example, when I mention Brother Austin’s house, an image of my mother comes to mind. She’s wearing a can-can dress on her birthday. She’s about thirteen. What also comes to mind is a photograph I took a few decades later, when I went home in 2003. You’ll see that not much had changed, except perhaps the wooden panels had been replaced by galvanized sheets, the plants and the wooden/wire bleach are gone, the concrete casting at the base of the pillars had worn away, like the gumline of a smoker. My mother was, by that time, in New York, struggling.

But notice the arch, the fixed jalousies.

Looking at where my mother stood, by then more than half a life away from me, I notice the implicit connection, the extension of perspectives across fading decades.

You’d find that I’m operating in a different rhetorical–and, let’s face it, aesthetic–register than would make the Carib House meaningful to me. I make no attempt to mask this fact. Arches notwithstanding, there’s an emotional connection–a pathos, even with the houses whose occupants I do not know–that just isn’t there with the Carib House. Even if you were to excuse the contrivance of visions–whoever took the picture of my mother, she in the former, me behind the camera of the latter, she present like a suggestion in the latter but not visible, and so on–reading my history selfishly means that I am restricted by context. And context, at least in this case, is significantly determined by what I’m able to recall and reconstruct. You know, meaning-making, and all that.

To me, to many of us running around its pillars, or walking beneath it on our way to somewhere, it carried as much wonder as an elevated block. The “somewhere else” places–those places we had to get to in the unhurried pace of our late 20th century youth–were more interesting. Like Marryat Street, a short distance away, where a piano repairman lived like a solo virtuoso troll in a manmade cave near the corner, across the street from the doctor’s office where my mother worked for a while. Or, nearer, finding ourselves by Alistair and Lester, noted undesirables, against whom we were taught (like fools) to cast a discriminating eye. They both played pan in the adjacent yard (though, by that time, badjohns like Mousey and them had mostly quieted down, the cutlass and bottle more of a rarity than a norm, even at carnival). Come to think  of it, our relationship to the supernatural is like that, as well, isn’t it? I doubt we ever acknowledged, with the same attention we paid the jumbie bird, that legacy of obeah that was embedded in the crossroads like a bottle cap in asphalt.

But this post is not only about these things, or the memories of people and places and things that can be linked, like a rabid network, from one to the other until we (the erstwhile livers of those memories) are related either by indelibly traceable blood or, as indelibly, by myth. Essentialist, vernacular mitochondrial, or something technical like it.

This is also about being at the crossroads of my relationship with the past I’ve left and that which remains, about the everyday monuments I’ve missed, about how easily elements of history can get forgotten, and how careless I’ve been with the histories I’ve had at my disposal. It’s not a cautionary tale, per se, though I appear to pose the moral early–and in the form of a question, no less. But when I look at the Carib House as it is now–the roof has been replaced, the original attic space halved, the windows have been redone, the ventilating function of louvres taken over by bricks, the sandy texture now painted–I wonder. What to do when the apparent significance of an archive seems to skip a generation? What happens when the attempt to reflect yields an image that is barely recognizable? The point is not that no one is going to do the looking for you. That’s obvious. Tell your own story, and collect the materials necessary to do that. The point is not that there is no reason to wait. That’s also obvious.

The point is that there’s a photograph of me, my cousin Leon, and his then girlfriend Natasha posing (me like a fool) with the Carib House in the background. It’s somewhere. I’ve looked, but I don’t know where it is. And as I consider the monuments that stand at crossroads, I fear what would happen if I did find the photograph and had no idea what there was to see–or that I was ever even there.

That is the point.