It was only later that I would learn his name… 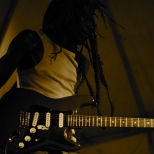 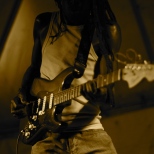 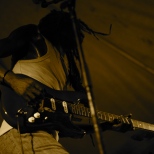 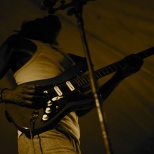 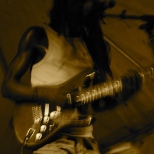 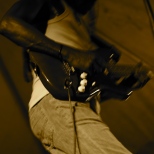 Ras Levy. He sings lead and plays for the Guadeloupean reggae band Jah Kontwol. I hadn’t ever heard of him or the band. I didn’t go to Mero in search of him. There was no rumor that he would be there, or that there would be a soundcheck for the Reggae on the Beach show the following day. Word of that came later, when Frederique asked if I was the photographer she was expecting. It was her event. I answered in the negative and thought equally of my unknown subject and of smoking. Close to Frederique, I could smell the stale smoke on her breath, faint and unapologetic.

We know, after all, that in the complicated economy of expressions that define our interactions, the unwillingness to apologize for our indulgences is an affordable luxury.

Is this a hobby or for your work?
Both, Frederique. Both.

I remember saying “Frederique” as if I were talking to a someone I have loved out of habit: soft, knowing, without pretense or agenda. She smiled and let me be. I turned away, back to look again at him.

We were playing, he and I.

He with sound. I with light. Both of us playing, playing with movement, the movement of bodies, mine and his. Playing on the body. Playing in a place where light and sound touch. Playing with movement. Both of us moving and wanting to move those who see what we do. Those who come looking or (say, after a day in the bush or at a bar) have the good fortune to stumble upon it and stay to look at what they have stumbled upon.

Of course, I’m rambling a bit–and quite deliberately. Aside from the obvious absence of grace it entails, I have an appreciation for stumbling. Not least because it rhymes with humble, but also because it evokes humility.

Try it. Stumble. Remind yourself. Come to the space between the step and the fall. See what comes back to you without being summoned. Listen. Indulge without reason. What you feel will be softer than a kiss. What you see will be softer even than shadow. Remind yourself. For those of us who, despite our apparent invisibility, must simultaneously endure the violence of hypervisibility, that reminder is life-giving. For those of us who inhabit a world that forces as much silence and suffering as it does dialogue, that reminder.

Those of us who have learned to forget. That reminder.

I hadn’t gone looking. And what I found was sublime not because it defied explanation but because neither he nor I required it.